From time to time I get a question relating to my synthesizer pages: "Well, what do the instruments sound like?" As it turns out I not only like to build instruments but also enjoy making music. Most of my music tends to have something electronic about it, hence my one-man-band name All Things Electric. I have never performed solo live, however I have had a certain involvment in various bands, most recently the 80s synth revival cover band Stahlwerk Einundneunzig. 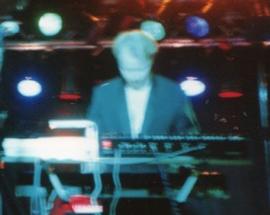 In concert (not solo albeit with Stahlwerk Einundneunzig)
My own style is largely influenced by 1980s synthpop (Kraftwerk, early Depeche Mode, Rational Youth; you get the picture), and semi-ambient electronic music like Tangerine Dream, Synergy and Graeme Revell (and also not-so-electronic, like Mike Oldfield). I tend to use analog synthesizers (perhaps more correctly analog-style as I use the NordLead2 a lot) for the main sound generation, augmented by simpler samplers like the Roland S-10 (one of my favourites. I have three.). I also enjoy playing acoustic piano.

From time to time I've used quite a lot of sequenced parts, mostly using one or two Alesis MMT-8 sequencers. I do enjoy actually playing music, not just programming it, so sequencer usage varies.

I very seldom "write" music in the literal sense. I fiddle about with a synthesizer and if something interesting turns up, I record it, most often using multiple overdubs. Originally I did all my recording using "ping-pong" on a Tandberg 9141X reel to reel tape recorder, yielding mono results. Having skipped the Portastudio craze (I never did like the limitations of cassette or only four tracks) and a very brief flirtation with reel to reel four-track (a rebuilt Sony TC-366-4 Quad Stereo machine) I purchased a Korg D8 8-track digital recorder several years ago, which I still use. Although limiting by today's standards, it's still a big step up from the Tandberg, and being relatively simple means it's easy to work with and doesn't get in the way.

I'm not too hot on effects, mostly I've just added some reverb to take away some of the dryness.

Most of the stuff on this page is pretty old by now, certainly nothing after 2000. Some newer stuff is on my SoundCloud page which partly overlaps this one.

All music is written and © Copyright Ricard Wanderlöf . Permission is hereby granted to download and listen, but not for any other use. If you want to use it for something like a film or include it in a compilation, contact me and we can work something out.

The first piece here was done in 1999 and I couldn't think of a better name for it so I named it after the current date ... a fate it shares with many of my tunes. It is quite typical of my style.

It's an instrumental piece, mostly performed on a NordLead2 (including drums) and a [Roland] S-10 sampler if I remember correctly. It started out on a rebuilt four-track reel-to-reel (Sony TC-366-4 if you must know), and was then copied to my trusty Korg D8 8-track digital recorder for mixing and some added parts.

This is an attempt at a more vocal piece, albeit with sampled vocals. Mostly just an experiment, several people have told me it has a humorous side - you decide for yourself. It was also done in 1999.

Again, the Nordlead2 was used for the synthesised parts, with the S-10 providing sampler resources. A Yamaha RX-11 provided the drums, a machine which was one of the mainstays of Stahlwerk but which I don't use very much anymore.

Most of what I do is instrumental, but I do write the occasional song with real vocals. This is one of the few pieces I've written that has actually been performed in a band, although the version here is me solo. The song is about meeting people who are far removed from reality in one way or other and who you'd like to pull back into this world. Originally written during around 1990, this version was re-recorded in 2001.

Again, the Nordlead2 provides the main sonic element here, with an Alesis HR-16B providing the drums. Hm, I think that's about it soundwise. I remember using the MMT-8 to a large extent, virtually sequencing everything except the solos.

Keeping with the vocals, this is a slightly uptempo synthpop cover of the Swedish band Adolphson & Falk's hit Blinkar Blå. We covered this song in Stahlwerk more or less in its original form (but not with me singing!), but I always wanted to experiment with an uptempo version.

In a minimalist fashion, the bass is provided by the Pro-Mini synthesizer, using its built-in sequencer, and the drums are provided by an SR-88 drum machine. The rest is done on the Nord Lead 2.

Recorded in 1997, with no effects, on the Tandberg 9141X it shows its age but still has certain charm I feel.

Now this is an old one, partly included here because it was performed solely on the Delta Seven synthesizer. The piece was recorded around 1983 not long after I had completed the machine. I used my trusty old Tandberg, with about 5 or so ping-pong overdubs. Unusually for this type of recording, it is in (some sort of pseudo) stereo, thanks to some lucky timing of the rhythm.

This tune is completely improvised and was recorded live between a couple of takes with a band I was playing with many years ago, around 1984 or something like that. The bass is the Delta Seven synthesizer, triggered by the internal LFO, the strings come from the ill-fated Poly-9 chorus synthesizer, while the main melody is played on the then-new [Yamaha] DX-7.

Here's another demonstration piece, this time using only the MiMi-a synthesizer. It is some sort of variation on Johann Pachelbel's Canon in D. Originally recorded on four track reel-to-reel in 1989 or something like that. All you hear is the MiMi-a, apart from some slight reverb.

This piece was written when the earth was passing through the Leonid meteor cluster a couple of years ago (could have been 1999). It represents a break in style by being more ambient in nature.

Hm, I should really turn this page into a NordLead demo page, as once again the NordLead2 provides all the sonic element.

Back to my home page.