The MS6 is a six-voice fully programmable multitimbral analogue synthesizer in a 1U rack box. It utilizes the Curtis CEM3396 sound chips, just as the the Oberheim Matrix-6/6R or Matrix-1000. It can be regarded as a "poor man's Matrix", in that it has the same basic sound, but lacks several of the Matrix's key features, like matrix modulation. On the plus side, the MS-6 is fully programmable from the front panel (unlike the Matrix-1000) and six-voice multitimbral (the Matrix-1000 is monotimbral, and the 6/6R bitimbral).

The MS6 was built by a British company called Cheetah, who started out making low-cost home computer accessories, and moved on to making musical products. Most well known are perhaps the master keyboards. Also well known for, unfortunately, the low production quality, which also affected the MS6.

One thing about the MS6 that you should be aware of today, is that it uses a Nickel-Cadmium rechargable battery for patch storage, and these are prone to leakage after a long time. (The same type of battery is used in the Korg Polysix). The electrolyte in the battery is corrosive, and battery leakage will cause damaged PCB tracks, and also component failure in more severe cases. So if you haven't yet, please replace the battery in your MS6 to keep it operating.

Did I mention replacing the battery?

So what's so special about it?

In a few words: the MS6 is basically the only multimbral compact affordable analog rack synth I know. More specifically:

What's not so nice is:

So what did I do about it?

Being interested in analog synthesizers, but still a programmer at heart I decided to do a slight rewrite of the operating system. I won't go in to all the gory details here; suffice to say that the program code is quite easy to read; probably not written by an ace programmer, but at least it gets the job done. It also is quite easy to modify.

Finally, I came up with the following changes:

The extra patch locations were acheived by packing the patch data in the internal RAM. The sysex dump format is basically the same however. In order to maintain compatibility with the stock MS6, the dump of the first 96 patches is the way it always was, with the final 32 patches being sent as a separate dump immediately after the first 96.

The final result is available as a file ready for programming into an EPROM, to replace the factory ROM in the MS6. Email me if you want a copy of the file!

What about hardware mods?

Well, I haven't planned on putting anything up here yet, but I did add a rotary volume control, which is a godsend. (You can see the new volume pot at the bottom right of the picture above.) Also, the machine I have suffers from improper grounding; basically, the PCB is not connected to the case at all. An extra wire cured this.

If you find an MS6 you may well find it needs a few hardware mods...just to get it working! As I mentioned before, quality in Cheetah products is somewhat of a dubious issue; mine has always performed flawlessly but it appears to have been rebuilt at the factory. From what I can tell, the front panel board and main board were supposed to be connected by a couple of flat cables which plugged into connectors on the respective boards. On my machine, the wires have been soldered into place, which takes care of any dodgy connectors.

Apart from that there are a number of mods I could think of...

Any other software mods?

Yeah, there are a few that would be nice. Although the MS6 supports sysex dumps, individual parameters cannot be edited via sysex, which is a pity. Also, it would be nice to be able to edit individual parts of a multitimbral patch without having to exit into monotimbral mode. I don't think I'll ever get around to doing anything of this however.

Having a call for schematics on this page for quite some time, I've thankfully got two a few responses over the years. First I got a full size (paper) copy of the schematics which unfortunately was rather lousy so I never bothered scanning it. Then someone sent me a finished scan as a pdf. Finally, Alexander at Plasma Music did the nice job of putting and joining together the individual images into a nice indexed document. (See more of Alexander's adventures with the MS6 here) So here is the Indexed MS6 Schematics (pdf file). For reference, the MS6 schematics (scanned from big sheet) is also available, as I haven't checked if they are indeed from the same original document. If you have an alternate version or other information, I'd still like to hear from you!

Also, the service manual for the Oberheim Matrix-6/6R can be of a certain value as it uses the same sound chips. Most of the circuitry around the CEM3396's are based on the CEM3396 application notes anyway. At any rate, when it comes to the CEM3396 circuitry, including the output stage and noise generator, and largely the timer chips for the DCO timing, a great deal of help can be had from the Oberheim schematics. The rest of the circuitry is a mostly run-of-the-mill 8-bit microcomputer (but using a 6303 microcontroller instead of the 6809 CPU used in the Oberheim).

Did I mention replacing the battery?

Save your MS6! Replace the battery!

The original Nickel-Cadmium was probably intended not to need replacing, as it could be recharged, rather than having a standard Lithium battery such as a CR2032 which needs replacing every 5 to 10 years. However, in practice, the NiCd lifespan is limited, and when they do go, eventually you'll be left with a mess that is difficult to clean up. So, in practice, it's better to replace the NiCd battery with a Lithium button cell of the CR2032 (the most common veriety).

However, note that replacing the battery with a Lithium cell requires a slight modification to avoid the MS6 trying to charge the cell, which in extreme cases could cause it to explode. The modification is simple, and involves replacing resistor R11 on the main board with a 560 ohm resistor in series with an 1N4148 (or similar) diode. See the picture below for correct orientation of the diode (note the position of the black band). The resistor is not polarized and can go either way.

(If you have a diode soldered across R11, possibly with one end attached to its neighbour R12 (they share a common PCB trace), remove it along with R11 as it's not needed either).

In the pictures below I've soldered the battery in place. You can also use a battery holder to make future replacements easier. There is a small risk though that if you bang your MS6 around at some point, that the battery would dislodge itself from its socket. 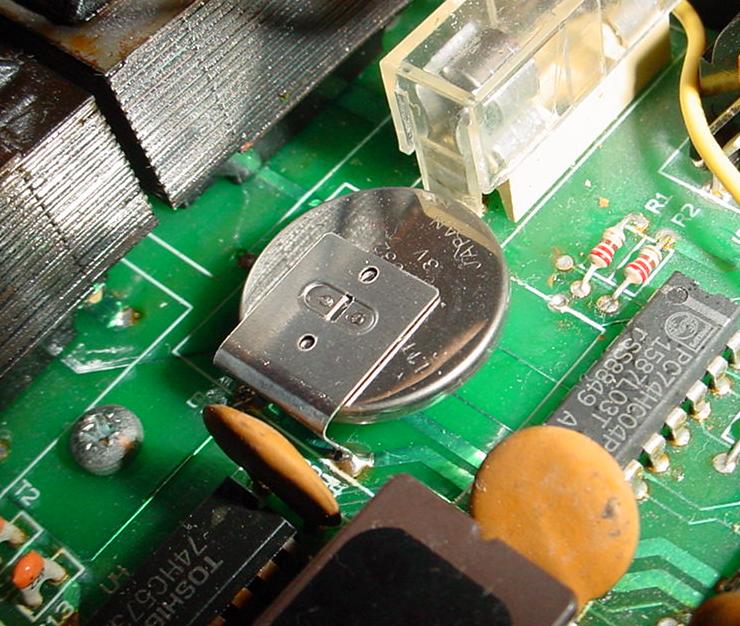 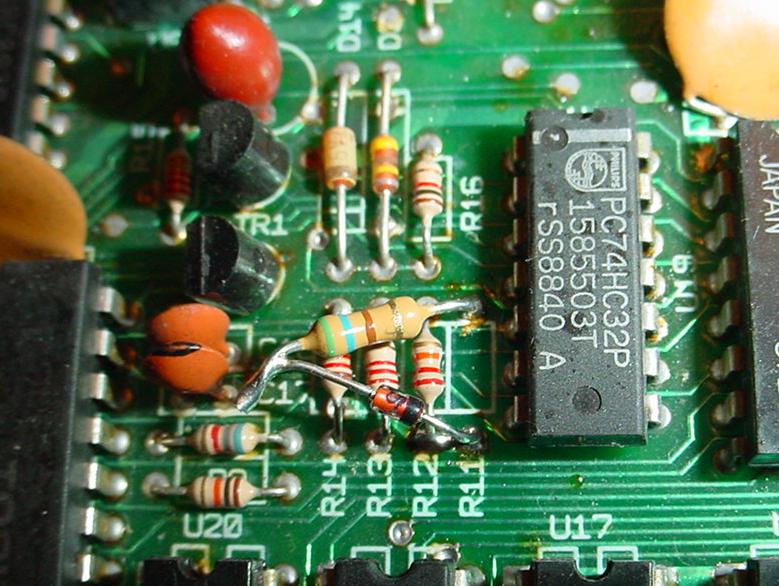 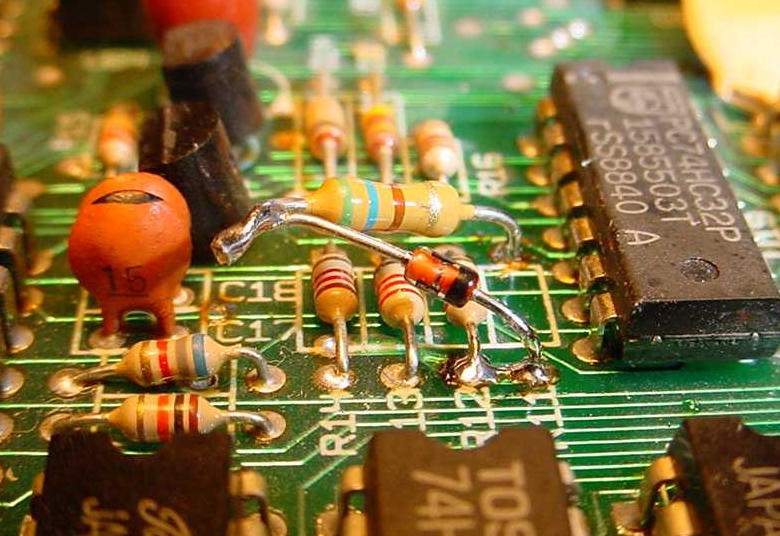 Well, there aren't to many of these. An excellent one is Kristofer Maad's MS6 resource center, including a text version of the manual, a patch editor, disassembly of the ROM code and more! Kristofer has also done some serious ROM hacking adding interesting new features!

Back to my analog home page.